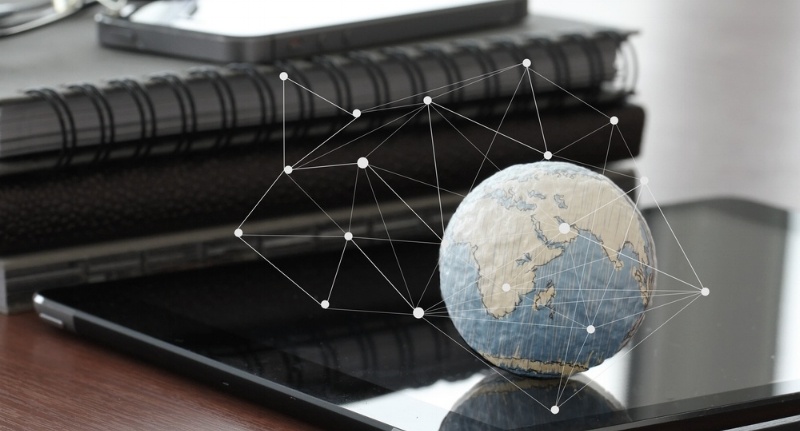 As we enter the last two weeks of Q3, the global equity indexes continue to brush off the warnings from market naysayers and set new highs. Just this week in the U.S., the DJIA has broken through 22200, the Nasdaq 100 closed above 6000, and the S&P 500 missed closing above the 2500 level by a mere 1.63 points. The progress for the latter two U.S. markets has stalled since, so it is premature in either case to call the breakouts confirmed by follow through buying. On the other hand, at a time when the commentary that is has been dominated by calls for a 5% to 10% pullback, the simple fact remains that equity markets have found the will to push higher throughout the summer, despite the geopolitical concerns, natural disasters, and overall lack of legislation in Washington.

While this certainly doesn’t mean that the equity markets have become impervious to unforeseen shocks, those calling for the market to correct based on the “due factor” are ignoring the data. The current U.S. environment is characterized by low oil prices, a lower USD, low interest rates, high liquidity, and inflation below target levels. These conditions are not normally associated with the end of a business cycle. Credit markets, which normally start to break down well before the equity markets, also are not flashing any warning signs (see chart 1 below). 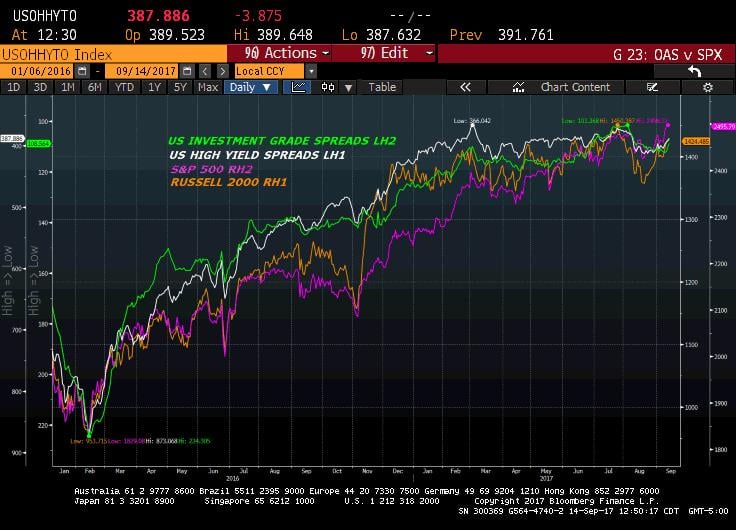 My personal view remains, notwithstanding the uptick in geopolitical tensions, that the last 18 months have witnessed a considerable improvement in the global economic environment. Since hitting a cycle low in February 2016, Global PMI has been in an uptrend (see chart 2 below). 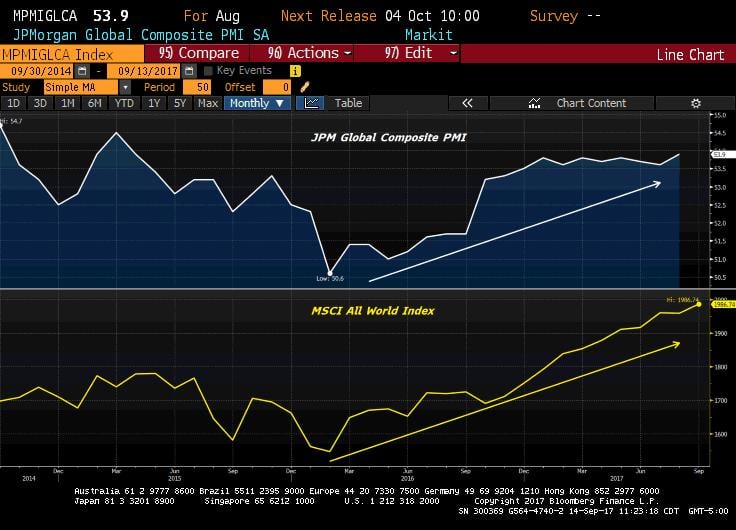 The latest release for August came in at 53.9, which is the highest print since April of 2015. Coincidentally, February 2016 also marked a multi-year low for the MSCI All-Cap World Index, which has risen by 30.5% since Global PMI reversed course. The improving global economic picture has been the main driver of the markets. From a global perspective, EPS are projected to grow by over 23% over the next 12 months, which puts forward P/E of 16.3 on the market, which is higher than the historical norm but not too pricey given the projected earnings growth. 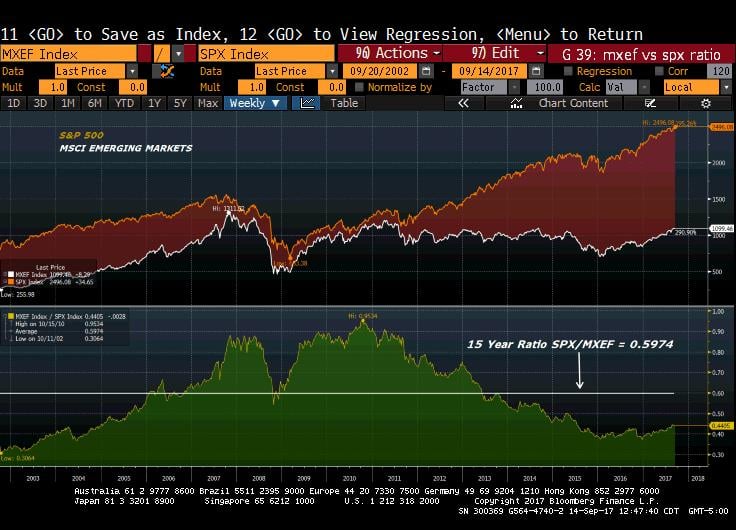 While the outperformance has been significant over the last 20 months, the EM is still quite a ways from reverting to levels that would warrant concern, given the backdrop of synchronized global growth and USD weakness. The fact that much of the EM story has taken place within China and the periphery economies of that region means that many US based commentators have been slow to react, although the robust returns have started to draw investor attention and will likely attract additional flows as we enter the end of quarter reallocation period.

While global equities have rewarded investors that maintained exposure despite the headlines, they are not the only asset class that has delivered returns robust returns in 2017. Much of the commodities complex has rebounded after a lengthy multi-year bear market. Gold has garnered much of the headlines this year, appreciating 15.2% year to date, outperforming both the S&P 500 and the DJIA. Gold has long been used as a hedge against inflation and rising growing geopolitical risk, and is not normally used as a forward looking indicator on the economic outlook. Other commodities across the complex serve as more reliable indicators of future activity. When you take a look at the performance of commodities that are more associated with activity, there is further support for the global growth story. Chart 4 below illustrates the performance of commodities that have industrial applications or are used in construction. 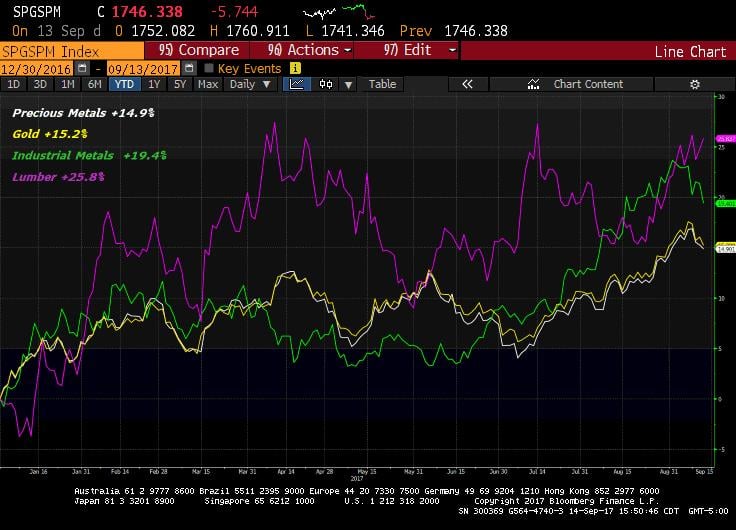 Industrial metals like aluminum, copper, zinc, tin, and nickel have outperformed precious metals by over 400 bps so far in 2017. Lumber, which is most closely linked to home construction, has outperformed all metals with the exception of palladium, which is grouped with precious metals but most commonly used in the catalytic converters of car exhaust systems. While USD weakness does explain some of the performance, the demand side of the story has been the principal driver. Add on two devastating natural disasters within the span of two weeks, the demand story should remain intact, as rebuilding the affected areas will require an enormous amount of resources.

So what could throw the global story off the rails? The biggest risk I see is a policy mistake on the part of central banks around the world, as they continue to normalize rates and begin the process of shrinking their balance sheets. Should central banks become too aggressive with rate increases, the risk of a recession will rises as higher rates will discourage consumption and put pressure on the jobs market. Given that wage pressure and inflation remain subdued, the risk is relatively low.