On the surface, the last month of trading has seemed rather placid, as the S&P 500 has managed to eke out a positive gain of 1.54% since November 7th while trading in a 100 point range between 2560 and 2660. However, underneath the surface we have witnessed a violent rotation out of the technology sector and into financials and consumer related equities. This has generated a significant dispersion of performance across sectors, despite the calm appearance of the broad index. Industry groups that were left by the side of the road earlier in the year, such as apparel manufacturers, consumer staples, banks and retailers were bought, with those purchases being funded by heavy selling in semiconductors and software stocks. Meanwhile, the VIX (CBOE Volatility Index) currently trades at 11.2, a level that does not insinuate fear in the overall market.

This is only the latest example of a pattern in which low levels of volatility of the broad S&P 500 index, relative to historical norms, masks more normal levels of fluctuation under the surface. This has long been true for individual equities, but has become increasingly more prevalent with entire sectors and benchmark indexes, suggesting that the dominant role of passive investing is causing wider dispersions amongst entire sectors within the broad market. While broad market fear gauges like the VIX give the appearance of a tranquil investing environment for the market as a whole, the currents underneath tell a different story. That is not to say that the market has become complacent, since individual equities have been punished for earnings misses, in some cases falling 15-20% when falling short of expectations (see PCLN & EXPE), but it is certainly a different environment. 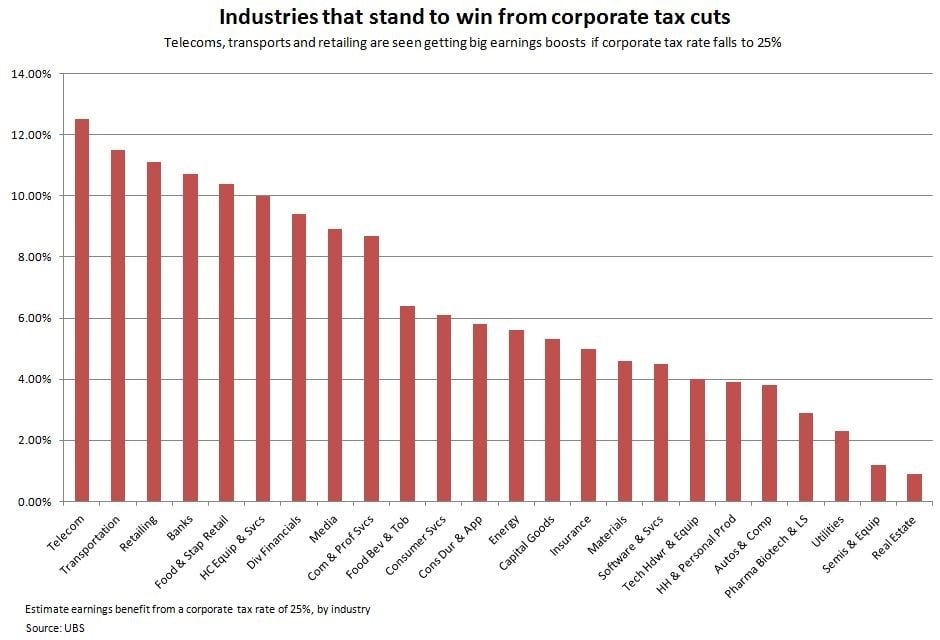 The five industry groups that stand to reap the biggest boost to earnings from a tax overhaul have outperformed the broad market by a significant margin over the last month, while those that will benefit the least have lagged (see chart below.) The industry groups that have performed well over the last month share several characteristics that help explain the rotation: domestic focus and high effective tax rates. It will be interesting to see how the market reacts to any material changes to the current version of the bill. The current pullback in the technology sector does appear to be providing an attractive entry point in some high quality companies that, while not having high effective tax rates, would get a boost from the proposed tax holiday on the repatriation of cash held overseas. 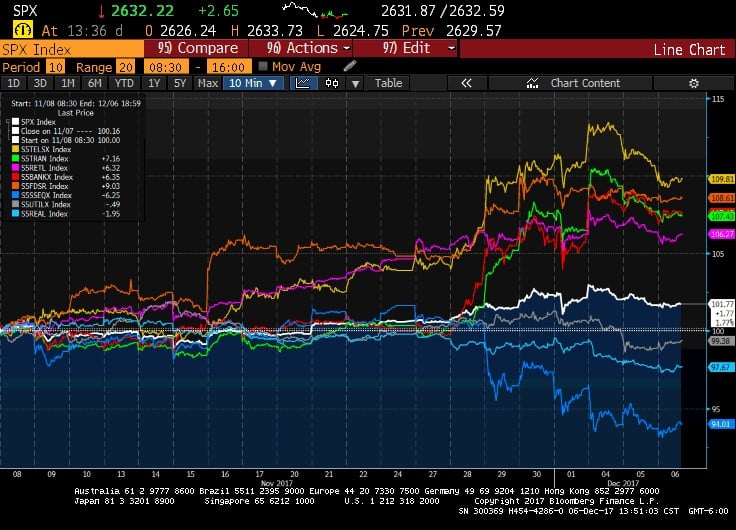 Overall, global market conditions are constructive for higher equity prices. The Citigroup Economic Surprise Indexes for all regions continue to be positive, with the Eurozone leading the way with a reading of +67.0, followed by the U.S. that has rallied from the summer trough of -78.6 to a current level of +62.9. Credit spreads for both investment grade and high yield bonds continue to hover around multi-year lows, showing no signs of deterioration in the debt markets. Although some of the more recent inflation data has come in a bit “hotter” than expected, it still continues to print below levels that would be concerning. One potential reading that could spill over into earnings, if it persists, is the widening spread between PPI (Producer Price Index) and CPI (Consumer Price Index.) The PPI index crossed above the CPI index earlier this year, and as of the latest reading for 10/31/17 the spread has widened to over 75 bps. Either this will be passed through to consumers in the way of higher prices, or corporations that require high inputs will see their margins squeezed. Also worth watching is the spread between the 2YR-10YR treasuries, which continues to compress, currently 52.4 bps, the lowest levels since 2007.