This week, emerging market investors were greeted by a plunging Turkish Lira, which as of this writing is down more than 15% relative to the major developed market currencies (see chart below). As carry trades are unwound as investors head for safety and lick their wounds, we are reminded of the volatility that erupted in emerging market currencies between 1998 and 2002. During this period, the USD strengthened to 15 year highs as multiple crises would break out around the world, most notably the Asian financial crisis, Russia’s 1998 default, Brazil’s 1998 real crisis, and Argentina’s massive devaluation following its default in 2002. The fall in the Turkish Lira that we have witnessed today, while significant, is still well below the losses that the Turkish Lira suffered on February 22, 2001, when the currency lost 30% against the USD. 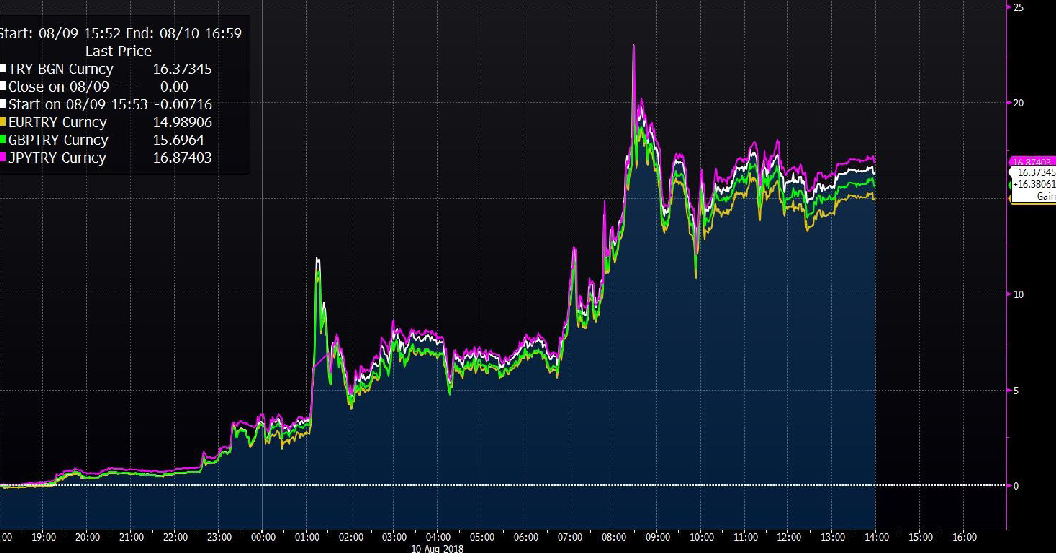 To make matters worse, Turkish President Erdogan vowed to stand firm against market pressures and US political demands, where the Trump administration imposed sanctions on Turkey in response to the imprisonment of an American pastor. With the collapse of the currency and very few options available to stop the bleeding, as President Erdogan has stated his opposition to drastic interest rate hikes, the market is now trying to handicap the potential for contagion as well as the imposition of capital controls. According to a Bloomberg story, bank branches in Istanbul “indicated that foreign currency withdrawals had skyrocketed” and banks that were visited “reported that they were in more need to cash from headquarters."

The market responded to the news out of Turkey with broad selling across most equity markets around the world, with the most pain being felt in Europe due to the higher potential of contagion risks in within the banking system. The German DAX index finished the day off 1.99%, while the Italian FTSE MIB index fell 2.51%. It is worth noting that Germany is Turkey's largest trading partner, and Italian banks are holding a good size chunk of the $224B of exposure that foreign banks have to Turkey.

Emerging market ETFs, perhaps unjustifiably, also took it on the chin. The two biggest EM ETFs by assets, EEM and VWO, finished the day off by 2.13% and 1.99% despite having very little exposure to Turkey. The iShares MSCI EM ETF (EEM), which tracks the MSCI EM index, has a weighting to Turkey of 0.53%, while the Vanguard FTSE EM ETF (VWO), which tracks the FTSE EM Index, has a weighting of 0.61% to Turkish stocks. Some of this is currency related, as the DXY (USD index) broke through resistance to resume its trend higher (see chart), which is a headwind for EM equities. However, I believe that much of the damage was due to the market taking a “shoot first, ask questions later” approach to de-risking.

Goldman Sachs released a report this week on the external funding requirements for emerging market countries. The conclusion of the report was that Turkey, which has a large current account deficit and has relied heavily on external capital flows to fund its growth, is more of an outlier relative to the rest of the EM complex. While the regime of President Erdogan has done away with the idea of central bank autonomy, most of the EM countries have adopted more conservative approaches in an effort to become less cyclical. The end result is countries that are in a much better position to weather more Fed rate hikes and trade disputes, which was not the case 10 years ago. This recent sell-off in EM equities may be providing a good buying opportunity; one just needs to sift through the rubble to find the baby that was tossed out with the “bath water.”